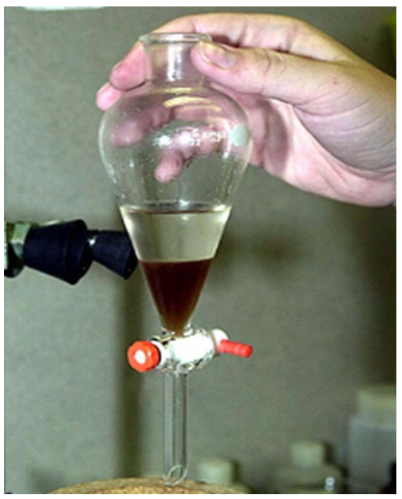 Separation of undesirable species from streams is a critical step in nearly every process. Whether its waste removal in a wastewater plant, carbon capture in a power plant, or product purification in any traditional chemical synthesis process the separation step is important when considering the overall sustainability of the process. The end goal of these technologies is to achieve more sustainable processes while still maintaining effective purification of waste or product streams. Some of these include evaluating engineering chars for contaminant adsorption from wastewater and using novel solvents (Deep Eutectic Solvents) for sustainable carbon capture from either air or flue gas. Several different basic separation processes are explored with these technologies; such as solid:liquid adsorption, liquid:liquid extraction, and gas:liquid absorption and purification.

Having an effective separation process is only an early step in the overall research though. After experimental evaluation process models and technoeconomic analyses are completed to compare the novel separation technologies to the standard technologies currently used in industry. This allows for a direct comparison and for us to make recommendations for future studies on either the separation step examined or on similar technologies.

Deep eutectic solvents (DES) are designer solvents made by combining multiple chemicals to form a single phase. This combination dramatically lowers the melting point of the combined solution, often resulting in a liquid at room temperatures, even if the individual compounds are all solids at above 200°C. A variety of different compounds combinations can be used to make DES. Type I DES are made from quaternary salts and metal chlorides. Type II DES contain metal halide hydrates and a salt. Type III, the focus of the research in the Reza lab, are made from quaternary ammonium salts and hydrogen bond donors. Type IV DES are made by combining metal halide hydrates and hydrogen bond donors. DES can have a wide variety of hydrophobicity, acidity, polarity, density, etc. New DES are constantly being discovered and described experimentally; this means that any useful research in the application of DES should be flexible enough to consider solvents that have not even been discovered yet. Therefor, a large portion of the research completed on DES involve modeling and process frameworks that can be adjusted to consider new solvent feeds.

COSMO (Conductor Screening Model) is the main tool used to predict and model DES properties. The figure below shows the typical process of first modeling a molecule’s geometry, then its electron density using density functional theory, and then finally mapping the charge density of the molecule into a profile. This method allows for relatively quick property calculations for various combinations of DES components, and has given accurate results for properties such as density, liquid-liquid equilibrium between DES and solvents, and Henry’s law constant for gases being absorbed into DES.