Reza Research Group of the Chemical Engineering Program at Florida Tech have several ongoing research projects on upgradation of wastes into values by using the sub-and supercritical properties of various fluids.

HTC is a mild hydrothermal treatment where wet biomass or wastes are treated at subcritical water temperature (180‐260°C) to produce the solid product widely known as hydrochar. At this temperature range, water is more reactive and behaves as a non-polar solvent due to the high ionic constant and low dielectric constant, respectively. As a result, subcritical water reacts with biomass compounds and the severity of the reaction depends on HTC process conditions, primarily with the HTC temperature. In terms of HTC reaction mechanism, biomass undergoes hydrolysis to produce sugar monomers first followed by dehydration and decarboxylation of hydrolyzed products, which yield sugar derivatives e.g., 5-HMF, 2-furfural, anhydroglucose. Finally, simultaneous condensation, polymerization, and aromatization of sugar derivatives take place in the liquid phase and nucleate nano-macro sized solid spherical particles. Hydrochar is a promising material which has vast potentials for a range of applications such as solid fuel, soil amendment, nutrient recovery, water retention, low-cost adsorbent, etc. This project focuses on the hydrothermal degradation of organic fraction of municipal solid wastes and produces a solid that could use as a fuel and/or adsorbent material. 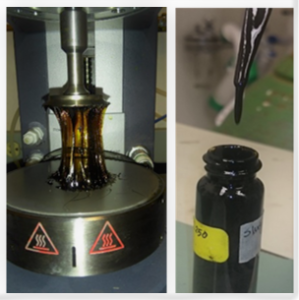 HTL is a treatment where the temperature is near critical (260-374 °C) and pressure is about 10-21 MPa. At these conditions, water is still liquid but has outstanding qualities, such as a low dielectric constant, which makes water act like a nonpolar solvent, leading to a greater solubility with organic compounds from biomass. Molecules that are hydrolyzed by hydrothermal liquefaction are highly reactive and are repolymerized quickly to form oily substances. This liquid product is called “biocrude” that can be further upgraded into liquid fuel or binder. This project focuses on the production of biocrude from animal manure and used them as an asphaltic binder. 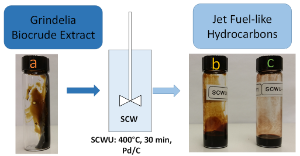 Water at supercritical conditions becomes a single-phase and exhibits lower viscosity and lower density than water at ambient condition. Furthermore, its dielectric constant significantly decreases with increasing temperature, causing it to behave like a nonpolar solvent. This project is mainly focused on an alternative method to upgrade crude in a more sustainable manner by using supercritical water (SCW). SCW is also considered an environmentally-friendly solvent as it turns to regular water at ambient temperatures. These ideal solvent properties are proposed to be useful in crude upgrading as it is expected that SCW breaks down longer chain hydrocarbons while promoting hydrolysis reactions that remove heteroatoms from crude. In this process, water molecules serve as potential hydrogen donors. Therefore, upgrading in SCW may be a path to reduce the oxygen content in the biocrude. 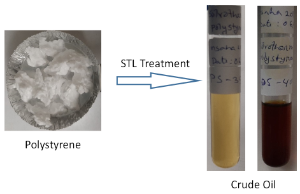 When it comes to degradation of organic polymers (e.g., lignin, cellulose, starch), sub and supercritical water are excellent choices as the feedstock does not need to be dried and water is a safe solvent. In addition to water, other solvents are used during the degradation of biomass include methanol, ethanol, propanol, and acetone. When it comes to the degradation of a dry waste (e.g., plastic), introducing water as a solvent could significantly lost carbon in the aqueous phase and formed more oxygenated products. To avoid this problem, a bench-scale experiment is underway to degrade various plastic wastes (e.g., polypropylene, polystyrene, polyurethane) by using a model solvent toluene and a refinery cut (e.g., light cycle oil). The ultimate goal of this project is to feed the STL converted crude to an existing refinery.