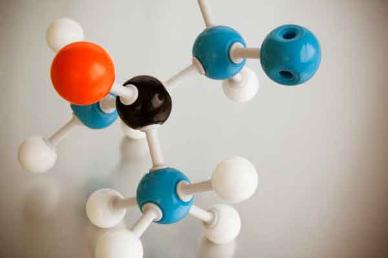 Our inorganic chemists at Florida Tech focus on a wide spectrum of research topics, including designing and developing new molecules for bioinorganic, energy, and defense research, green synthesis, developing low-coordinate cationic aluminum and gallium compounds and studying their application in catalysis, investigating low-temperature routes to nitride and oxide materials and synthesis of nitrogen-doped titania for photocatalysis.

Lewis acids are among the workhorses in synthetic chemistry in academia as well as pharmaceutical and industrial chemistry. The Wehmschulte group is working on the generation of very strong Lewis acids based on cationic aluminum and gallium centers. Compounds such as [Et2Al][CHB11Cl11] catalyze the reduction/hydrosilylation of CO2 to methane.

Main Group or Transition Metal cations are typically coordinated to a variety of ligands which stabilize the complex and moderate the activity of the metal, but also prevent the elucidation of metal cation specific properties. This project seeks to generate M2+ and M3+ cations that only weakly coordinated to their counterions and are soluble in low polarity organic solvents. The Wehmschulte group in collaboration with the Dagorne group at the University of Strasbourg in Strasbourg, France, has been successful in generating the first example of this type, namely Zn[HexCB11Cl11]2. The weak anion···cation interactions strongly increase the catalytic activity of the zinc center, which is demonstrated by its high activity as an olefin hydrosilylation catalyst. Current efforts focus on the extension to other metal centers.