The Department of Mathematical Sciences is excited to invite faculty, students, and experts in industry to join the newly launched STEMinar Series @Florida Tech. The objectives of the STEMinar Series are to explore research opportunities not confined to a single discipline and promote collaborative approaches leading to interdisciplinary solutions.

The ultimate goal is to set the stage for innovation by fostering the integration of ideas, creating new tools, and opening new avenues for multidisciplinary research. 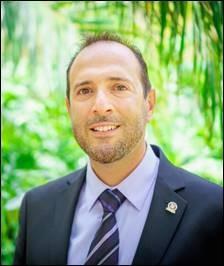 Abstract: The world we live in is far too complex for humans to analyze.  Yet our brains appear to have a corresponding level of complexity that can presumably be sufficient to better understand the world around us.  For instance, a single human brain has far more neurons and interconnections (synapses) than roads and intersections across the entire world.  How can the STEM fields work collaboratively to help map the complex pathways in the brain? In chemistry, we design small molecular tools that can be activated with light in some sense acting as small cameras “elucidating intersections,” which will enable a slow but gradual understanding of the complex brain’s network.

Biomedical and Chemical Engineering and Sciences

Nasri Nesnas received his Bachelor of Science as a dual major in chemistry and biochemistry at Manhattan College, New York, in 1994. He then pursued his graduate education earning two M.S. degrees and a Ph.D. degree in 1999, working with bioorganic chemist and University Professor Ronald Breslow, at Columbia University. Nasri was a postdoctoral research fellow for nearly three years working with Natural Products Chemist, Centennial Professor Koji Nakanishi, at Columbia University.

Nasri started his independent academic career at Florida Institute of Technology (FIT), in Melbourne, Florida, as an Assistant Professor in August 2002, and was promoted to the rank of Associate Professor in 2008, and to the rank of Professor in 2017. He was granted a National Institutes of Health (NIH) Award for his research in chemical neuroscience.  He hosted 2 international professors, and mentored 11 PhD, 17 MS, 45 undergraduate, and 10 high school students over the past 17 years at FIT.

He received funds from NIH, NSF, NASA, Intel Corp., FSEC, and several local corporations. He authored and coauthored 29 refereed research articles with over 1200 citations, and also published 18 conference abstracts, 3 book chapters, and presented 46 invited lectures including the opening session for a Nobel Laureate in Budapest, Hungary, and a Plenary Lecture in Pisa, Italy.

Abstract: Light and matter can be strongly linked together to form coupled systems.  Through material selection, this coupling can be tailored to achieve strong localized electromagnetic field enhancement. For visible light, surface plasmon polaritons (SPPs) result from the coupling along a metallic-dielectric boundary. However, at longer infrared wavelengths SPPs are not tightly confined so phonon polaritons, the coupling between the electromagnetic field and the lattice structure in a polar material, exhibit similar properties. Of particular interest is the generation of surface phonon polaritons (SPhPs) with hyperbolic materials. Hyperbolic metamaterials are artificial composite materials structurally designed to exhibit hyperbolic dispersion, which originates from one of the principle components of their electric or magnetic effective tensor having the opposite sign to the other two principal components.  Hyperbolic materials can also be found in nature.  Hexagonal boron nitride (hBN) is considered because it exhibits hyperbolic dispersion in the mid-infrared spectrum.

Basic mechanisms enabling the excitation of surface polaritons will be introduced along with coupled-mode theory. The integration of hyperbolic materials as well as two-dimensional metamaterials (metasurfaces) for infrared applications in hybrid waveguides, spectroscopy, and hyperlensing will be presented.