Designated to support research in Department of Chemistry at Florida Tech initially for research being conducted by Dr. V. K. Sharma then new research projects in the future years. (GF000134)

Donor specifies support for Sharma Project (Environmental Chemistry). In future years endowment income will be available to initiate and support new research in the Chemistry Department. 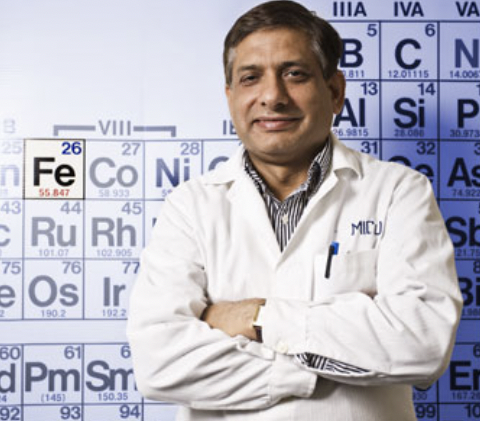 Dr. Virender K. Sharma, originally from India, obtained his bachelor’s and one of his master’s degrees from the University of Delhi in 1980 and 1982, respectively. In 1984, he received his other master’s degree from the Indian Institute of Technology, and his PhD from University of Miami in 1989.

Dr. Sharma was a faculty at Florida Tech for over 13 years (1999-2013). Dr. Sharma is currently a Professor at the Department of Environmental and Occupational Health, School of Public Health (SPH), Texas A&M University.  He is also serving as the Director of the Program of Environment and Sustainability of the SPH.  Dr. Sharma has made seminal contributions in the areas of chemistry and environmental applications of ferrates. Dr. Sharma has also made key contributions in elucidating stabilization and toxicity of natural nanoparticles in an aquatic environment, resulting in an impact on human and ecological health. He has published more than 320 peer-reviewed publications. Dr. Sharma has also published 55 book chapters, 36 proceedings, and authored/edited 8 books. His distinguished awards include Fellow of the Royal Society of Chemistry, Bush Excellence Award for International Research, Faculty Excellence in Research by Florida Tech, Outstanding Chemist by the American Chemical Society (Orlando Section), Outstanding Distinguish Scientist Award by Sigma Xi (Texas A&M University Chapter), International Fellowship awarded by the Chinese Academy of Sciences, and Invited Professorship by University of Paris, France.

This endowment was named in honor of his father, Sant Ram Sharma, to support departmental research.

Mr. Sant Ram Sharma was born in Gondpur Banehra in Himachal Pradesh, India. His childhood was spent in hardship at the time of World War I and his mother always taught him the values of hard work, integrity, honesty, and ethics.  He was the first among eight siblings who earned a two-year college degree before World war II.  Mr. Sharma passed his values to his five children and all received at least undergraduate degrees.   He appreciated the virtues of education and was a daily reader of newspapers.  In reading and listening to the news, he was amazed and excited throughout his life about the creativity of research that improves the quality of life for human beings.  He learned early in his life the importance of research and encouraged his children to pursue higher education.  One of his youngest children, Virender Sharma graduated with a doctorate degree in chemistry of natural waters in the United States.  Dr. Sharma received research funding from a non-profit organization, which allowed him to establish an endowment in the memory of his father, Sant Ram Sharma.  This income from the endowment can be utilized for pursuing Mr. Sharma’s values for improving the quality of life through innovative research in the field of chemistry.