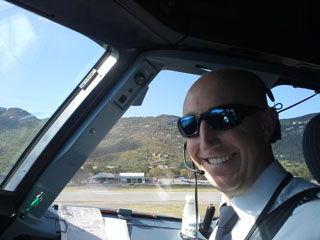 Scott Sindel's love for aviation began at an early age of two, when his grandfather took him to Port Columbus International Airport every Sunday morning to watch airplanes. As he grew up, anytime a plane passed overhead, Scott’s head instinctively lifted and gazed skyward. At the age of 17, Scott began flying lessons. As part of his Senior Class project at New Albany High School, he documented his progression from student pilot to a licensed private pilot. He earned his private pilot’s license in the spring of 2000. After graduating high school in 2000, Scott enrolled in Flight Operations degree program at Daniel Webster College in Nashua, New Hampshire. In 2002, during his sophomore year of college, Scott enrolled in Aviation Management at Florida Institute of Technology in Melbourne, Florida, without his parents knowing. Scott progressed rapidly, earning multiple ratings and licenses. He graduated with honors in 2004 and became a Flight Instructor at FIT Aviation, training students in both single and multi-engine aircraft. After 18 months of instructing, he was hired by ExpressJet Airlines where he flew Embraer 135-145 regional jet aircraft. In November of 2006, Scott was hired by Spirit Airlines, flying the Airbus A319, A320, and A321 series aircraft.

In 2003, while attending Florida Institute of Technology, Scott was diagnosed with Adenoid Cystic Carcinoma, a rare form of cancer. After receiving treatment, he was able to regain his FAA medical certificate. In 2007, he was told his cancer had returned. Once again, Scott was told he was unable to fly. His determination to get back to his passion led him around the country seeking treatments for this disease until finally in November 2013, the FAA granted Scott his medical and returned to Spirit Airlines. Unfortunately, after two months of training and only sixteen days of duty, Scott’s cancer returned once again. Scott fought cancer for nearly 12 years until his passing on July 12th, 2014 at the age of 32, surrounded by friends and family. Scott was loved by many and will be greatly missed by all.