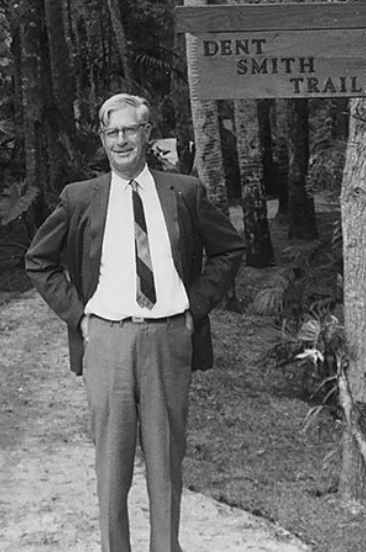 This fund was created to support and maintain Florida Tech's Botanical Garden.

Dent Smith, also known as “The Palm Man”, was born in Staunton, Virginia in 1897. He started his college education at Aurburn University but was enlisted in the Army in 1915 at the age of 18. There, he served for seven years and climbed up to the rank of first sergeant.

In 1929, Dent Smith had established his own brokerage firm after becoming a bond salesman in 1923. Ten years later, in 1939, he retired from his position as president of his own company and became profoundly interested in publishing a magazine called “Encore”, described as “a digest of the works of classical writers as well as modern.” However, during World War II, Smith sold it to another firm since it was never a financial success. In 1949, he moved to Daytona Beach and after “looking for a hobby that would keep his hands busy and his mind occupied”, he acquired four acres of land on the peninsula and, did not only started collecting palms and other tress, but also studying them. Eleven years after, he had 150 different palm species growing on his property.

His passion and interest in palm trees and other trees, lead him to think about starting a journal for a palm society. In 1956, he fulfilled that goal with the help of Dr. Harold E. Moore, a distinguished botanist. The journal was printed and illustrated under the name “Principes”, with the thought that “palm trees were the princes of all trees.” Throughout the following years, the society gained over 2,000 members, including many in Europe, Asia, and Australia.

Before his death in April, 1985, he received an honorary degree from Florida Institute of Technology in appreciation for the work he did in establishing a palm garden on