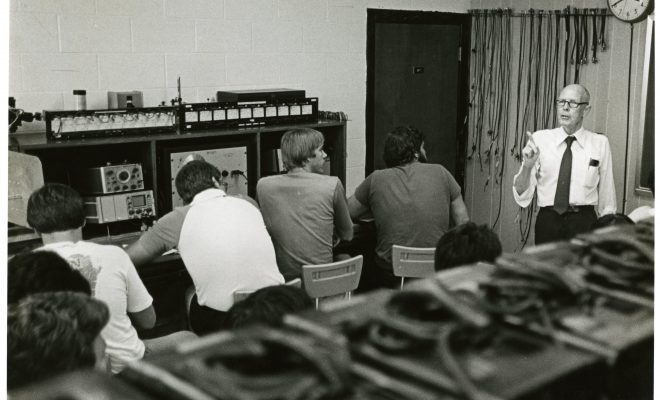 Establish an Endowed Chair in the Department of Electrical and Computer Engineering. (GF000007)

This Chair is in Electrical Engineering, solely in the field of Electromagnetics.

Walter Nunn, a professor of electrical engineering arrived at Florida Tech in 1969, just more than a decade after its founding. He spent many years as a faculty member, bolstering the knowledge and touching the lives of thousands of students from his microwave laboratory and classroom in the Frueauff building.

He passed away in 2005, and his wife Hortense passed in 2017. By then they had made clear their longstanding desire to enhance the teaching and development of electrical engineering by establishing a faculty chair dedicated to advancing research and education in that critical field.

In just his second year at Florida Tech, the university gained accreditation from the Accreditation Board for Engineering and Technology, now known as ABET, a critical step in confirming its place among the leading engineering schools in the country and solidifying the discipline’s key role on campus.

“In those days, electrical engineering was the whole School of Engineering, and I comprised 25 percent of the school’s faculty, being the fourth member,” Nunn told the university’s Florida Tech Today magazine in 2003. Nunn worked for Harry Weber, who served as both head of the Department of Electrical Engineering and dean of the graduate school.

Weber supported Nunn during those early days when Nunn used some unorthodox methods to advance the university’s teaching mission. “Harry helped me start the microwave laboratory,” Nunn said, noting that the original equipment, much of it built by students, was somewhat primitive. “Of course, we didn’t have room for it inside our building, so we put it together on tables in the parking lot.”

That arrangement remained until Florida Tech founding president Jerome Keuper came by during a lab session. “The lab went back into an extremely crowded building,” Nunn said.

In spite of these humble beginnings, Nunn pointed out with justifiable pride that the electromagnetic program he helped launch in 1971 was the first Ph.D. program at Florida Tech.

Both teaching and research were vital for Nunn. While he took great pleasure in teaching, he said his principal research in computer simulation and modeling was always a high priority.

Walter and Hortense, who both grew up in Louisiana, had no children but saw the Florida Tech community as their extended family. Hortense put the university in her will in 2005 after her husband passed away.

“Walter worked at the height of his profession, both in the classroom and in the laboratory. When I went to visit him in the hospital the day before he died, he was still talking about the projects he was working on at FIT,” said Syed Murshid, a professor of electrical engineering and Walter Nunn’s colleague of 25 years. “He served as an inspiration for his colleagues in the Department of Electrical and Computer Engineering and for faculty throughout the college. He was simply a joy.”

And Nunn’s legacy lives on.

In his commencement address in May, 2018 to the university’s spring graduates, Florida Tech Board of Trustees member Vik Verma, a successful Silicon Valley CEO, remembered his former teacher.

“One of my favorite professors was Professor Walter M. Nunn, Jr. He was a former Marine, a world-renowned professor in electro-magnetic theory and one of the toughest graders….Professor Nunn was an amazing man. He passed away a few years ago and I miss him today as does the entire Florida Tech family.”