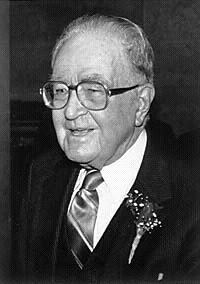 Support Evans Library resources in the fields of engineering and business. (GF000423)

James was born in 1907 in Harlem, New York City, both of his parents were immigrants from Ireland. He attended Townsend Harris High School and graduated in three years. He attended the Mechanical Institute in New York City.

After several years as a plasterer, James Gerard Kennedy founded James G. Kennedy & Co., Inc. in 1935. After serving his country as a highly-decorated World War II veteran with the Army Corps of Engineers, his first significant project involved a major renovation for Bankers Trust company at 14 Wall Street. The Kennedy Company has since done multiple major renovations for the same client for over 60 years.

A landmark project in the company's history was actually made into a motion picture by the New York Telephone Company. The film was titled ''The Miracle of Second Avenue.'' It told the story of how ''Ma Bells'' main switching center, devastated by fire, was restored to 100% working order in record time-with the help of James G. Kennedy & Co., Inc. under the leadership of its President, James G. Kennedy, Sr.

Mr. Kennedy's career has been marked by ongoing involvement in industry, civic and religious activities. He has served as the President of The Building Contractors Association of the City of New York, and has been a Committee Member and a member of the Board of Directors of the BCA. Mr. Kennedy also helped to maintain the integrity of the famous Heisman Trophy when he served as a Governor of the Downtown Athletic Club, home of the Heisman Trophy, in New York City. As Chairman of the Executive Council of the American Irish Historical Society, he was responsible for the reconstruction of the entire Fifth Avenue headquarters of the Society. Mr. Kennedy has been honored by The American Jewish Committee as ''Man of The Year,'' and in 1989 he was honored by The Dominican Academy as ''A Catholic Gentleman'' for his generosity in constructing the James G. Kennedy Science Center at the school. Mr. Kennedy is also a Knight of Malta.