Michael P. Moses is the president of space missions & safety at Virgin Galactic, overseeing the commercial suborbital spaceflight program. He leads the team in all aspects of safe and successful spaceline operations, including VMS Eve and SpaceShipTwo vehicle processing, flight planning and flight crew operations.

Established in 2007 as the F. Alan Smith Visiting Executive Program and since 2016 known as the F. Alan Smith Distinguished Lecture Series, this event was created to attract national leaders in a wide range of industries, typically those impacting transportation, and other subject experts to speak to students, faculty and community members at  Florida Institute of Technology. At least one executive speaker is welcomed to campus every Fall and Spring semester. Speakers address topics such as innovation in the automotive industry and self-driving cars, the hyperloop and high-speed rail, and innovations that impact business and the quality of life from space, land and sea exploration and travel. 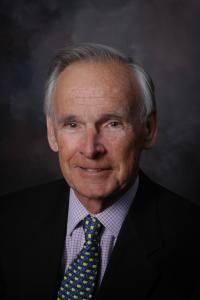 A member of the Florida Tech Board of Trustees since 1996, F. Alan Smith had a prestigious career at General Motors Corporation that spanned more than 35 years. Mr. Smith earned a bachelor’s degree from Dartmouth College in 1952 and an MBA in 1953. He now resides in Indialantic, Florida. Mr. Smith created this program to enhance the academic experience, introduce outstanding speakers to the university, and to engage the community around the topic of transportation—an industry in which Alan dedicated his career.