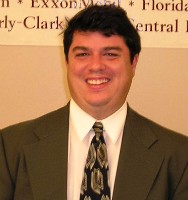 Since 2013, Dr. Brenner has specialized in maker education and on how to automate tissue engineering.    Learning how to disinfect 3D printed tissue scaffolding led to a company named Chem-Free Solutions (https://www.chem-freesolutions.com), which makes an ultraviolet disinfection tile for hospitals and assisted living facilities.  Unlike UV lamps, it uses six different LED's to eradicate all bacteria and viruses, instead of missing critical ones like MRSA and Clostridium difficile.  That work funds his research in the tissue engineering test bed area.

He is building a bioreactor array with the full complement of traditional chemical engineering sensors, but also a cytokine sensor for detecting the inflammatory response of growing tissues when exposed to a variety of inputs.   In support of the tissue engineering test bed mission, most of my research group is putting together a hybrid of a nanoparticle tracking analyzer, a confocal laser scanning microscope, a nanopositioning system, and a zeta particle analyzer to eventually watch cells move toward their eventual tissues in the presence of electric and magnetic fields, along with growth and differentiation factors.

Dr. Brenner's maker education initiative and prior nanotechnology experience is being converted into an electronic textbook for the Kern Entrepreneurial Engineering Network (KEEN).

A couple of Prof. Brenner's research students are putting together a literature review entitled "Mining, Refining, and 3D Printing a Lunar Colony".

One Ph.D. student that Prof. Brenner co-advises with Prof. Gordon Nelson (Chemistry) is developing the synthesis-structure-function relationships for flexible polyurethane foams (Think MyPillow.), after working since 2000 on rigid polyurethane foams for external tanks for the space shuttle program and for Larsen Motorsports' jet dragster's safety program.

From 2008-2013, all but one of Dr. Brenner's research projects evolved out of his nanotechnology education research and shifted much more toward biomedical applications of nanotechnology.

The one non-nano project Dr. Brenner worked on during that time involved environmental testing chambers for collection of mechanical property data for materials under extreme (cryogenic or very high temperature, controlled atmosphere, cyclic fatigue, corrosion (including with salt water), AND/OR creep) conditions.  He was looking to determine the root cause of failures under situations where multiple possible failure mechanisms are possible.

The hydrogen work led to a now defunct company named Florida Syngas that converted a variety of waste hydrocarbons into chemicals through a carbon monoxide and hydrogen mixture called syngas as an intermediate.  When then presidential candidate Barack Obama wooed his customers to absolve their environmentalist guilt with tax incentives for solar energy, Dr. Brenner left the energy business, very reluctantly.

After continuing similar work to his Ph.D. work, as well as some work in the area of nanotechnology while a postdoc at Argonne National Laboratory,  Prof. Brenner worked at Westinghouse Savannah River Company (WSRC) in the area of hydrogen storage using metal hydrides, another class of interstitial compounds. His key development during his work at WSRC was the use of metallic foams, a new class of porous metals, as media for the enhancement of heat transfer into and out of hydrogen storage beds. Such a development was critical for our nation's tritium mission (Tritium is a nuclear isotope of hydrogen.), but if hydrogen vehicles were to become a reality, cutting down the time for refueling to a reasonable time, as this heat transfer improvement enabled, was critical.

M.S. and Ph.D. in Chemical Engineering from The University of Michigan under Prof. Levi Thompson, with work focusing on development of catalysts for hydrodesulfurization and hydrodenitrogenation of crude oil.  Since the start of Dr. Brenner's graduate work, the key themes of his work are:

During this time, Prof. Brenner became an expert in a number of areas of materials characterization including Fourier transform infrared spectroscopy of molecules adsorbed (sticking) to surfaces and temperature-programmed desorption of these molecules, residual gas analysis of molecules desorbed from surfaces, chemisorption and physisorption, pore and particle size distribution analysis, surface area measurements, and scanning and transmission electron microscopies. Prof. Brenner's synthesis expertise during this time was in the development of porous, high surface area metal nitrides and carbides, which are interstitial compounds.

B.S. in Chemical Engineering from the University of Delaware

- Monte Carlo simulation of depolymerization of lignin (wood), the first step in papermaking.

May, 2008-current, Director of Chemical Engineering on Board of Advisors, Florida Syngas, Inc.

CHE 1091 Nanoscience and Nanotechnology Lab I

university-wide award of Teacher of the Year by the Future Educators of America in 2002 and in 2007.

Kerry Bruce Clark Award for Excellence in Teaching by the Florida Tech Faculty Senate in 2010.

April, 2007-March, 2008.  Florida Tech Faculty Senate President including the following awards:  Gavel Award for Distinguished University Service in 2008 and the College of Engineering's Service Award in 2008.

Since 2008, all but one of Dr. Brenner's research projects have evolved out of his nanotechnology education research and has shifted much more toward biomedical applications of nanotechnology.

The one non-nano project Dr. Brenner is working on involves environmental testing chambers for collection of mechanical property data for materials under extreme (cryogenic or very high temperature, controlled atmosphere, cyclic fatigue, corrosion (including with salt water), AND/OR creep) conditions.  He is looking to determine the root cause of failures under situations where multiple possible failure mechanisms are possible.