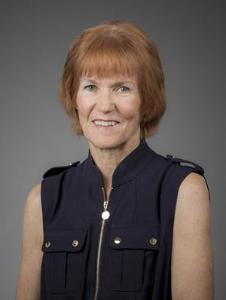 Mary Helen McCay, Ph.D., PE (ret), is a university professor and director of the Center for Advanced Coatings.

She is the former director of the National Center for Hydrogen Research and was a professor of mechanical engineering at Florida Tech. Prior to Florida Tech she was chairman of the Center for Laser Applications at the University of Tennessee Space Institute, where she directed the laser materials processing program.

While at NASA, Dr. McCay was a Payload Specialist Astronaut (alternate). She served as a Principal Investigator on a Microgravity Laboratory I flight experiment along with three other flight experiments and received the NASA Scientific Achievement Medal. She established a program to correlate the grain structure with the properties of superalloys and developed solidification and heat-treating processes for control of the structures. Dr. McCay also investigated miscibility gap material and the causes of changes in grain structure during metal casting and participated in failure analysis of space vehicle related problems.

2017-Present - Professor of Mechanical Engineering and Director of the Center for Advanced Coatings, Florida Institute of Technology

2003-2017 - Director of the National Center for Hydrogen Research

1975-1986 - Principal Investigator at Marshall Space Flight Center on materials programs related to microgravity processing and materials' properties. Developed programs and hardware for these programs. Testified to congresÂ­sional committees on results of programs.

M.H. McCay, John A. Hopkins and T.D. McCay, The Influence of Gravity Related Convection on Secondary Arm Evolution in NH4Cl-H2O, Metallurgical and Materials Transactions A, Vol. 29A, pp. 1137-39, March 1998.

The University of Tennessee Chancellor's Award for Creativity and Research, 1992

American Museum of Science & Energy, 1998 University of Tennessee B. Otto and

Current research is interdisciplinary, focused on integrating computational and laboratory methodologies for the improvement of the design, engineering, testing and manufacturing of advanced coatings for use in extreme environments. Work is being conducted on catalysts, sensors and storage mediums. A high energy laser is being used to produce materials with desirable surface properties related to these topics.

Research interests while at NASA George C. Marshal Space Flighter Center included the influence of the gravitational force on single crystal growth, directional solidification,and casting. This involved optical observations of the phenomena as well as investigating the grain structures and substructures in metallic alloys. Other interests were failure analysis and the influence of the environment (hydrogen, corrosive mediums etc.) on material properties.