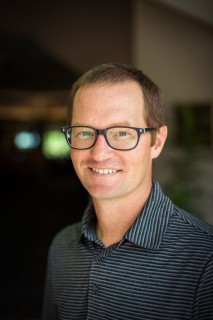 Dr. Petersen teaches journalism and media courses at Florida Tech. He is the director of student media and chair of the undergraduate communication programs. In his free time, he enjoys running,  reading, and spending time with his wife, three children, and lab mix. He's an avid Minnesota Twins fan and an admittedly fairweather Minnesota Vikings fan.

Prior to joining the faculty at Florida Tech, Dr. Petersen taught communication courses at the University of Florida and Santa Fe College in Gainesville, Fla. He taught Introduction to Public Speaking, Introduction to Interpersonal Communication, Nonverbal Communication, and Writing for Mass Media. He has also written for Florida TODAY, the Gainesville Sun, the Independent Florida Alligator, and the Florida Engineer. Before beginning his doctoral work, Dr. Petersen worked for the UF athletic association.

Faculty adviser for the Florida Tech Crimson, the campus newspaper.

“Experiences that Shape the Attitudes and Beliefs of Florida Tech Faculty toward Online Tools in Higher Education: A Phenomenological Study.” (Co-authored with J. Almasi, L. Gill, and J. Knight.) Presented at the at the Florida Communication Association conference in Orlando, Florida, October 20, 2012.

“‘So I can write anything?’: Confronting the First Amendment and the Spiral of Silence at a Free Speech Event,” Presented at the Association for Education in Journalism and Mass Communication conference in Chicago, Illinois, on August 8, 2012.

“Prisoners and Guards: Bob Dylan’s Contribution to the Popular Memory of George Jackson.” Presented at the Association for Education in Journalism and Mass Communication conference in St. Louis, Missouri, on August 11, 2011.

“The Death of Emmett Till: An Examination of Bob Dylan’s Contribution to the Myth of Till’s Death.” Presented at the Florida Communication Association conference in Orlando, Florida, October 16, 2009.

Dr. Petersen's research focuses on the role of popular culture artifacts on collective memory. His doctoral research examined how Bob Dylan's music of the 1960s and '70s shaped, and continue to shape, popular memory. Dr. Petersen is also exploring the way new media impacts the way news is distributed, created, and used.