About Dent Smith, The Palm Man

Our thanks to the author, who contacted your Editor, and to Donald Gaby, editor of Halifax Herald, publication of the Halifax Historical Society in Daytona Beach. This article appeared in the Winter, 2005 issue.] 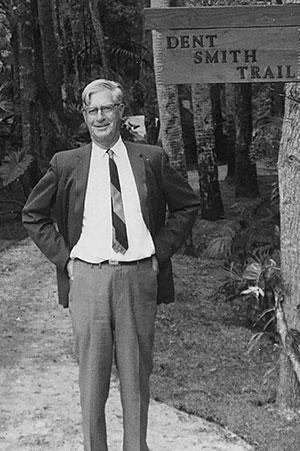 This is a tale of a man, Dent Smith, who, at his premises in Daytona Beach (four acres on the Halifax River) built up a large collection of different species of palm trees. He also founded a society of palm lovers which today has a membership of over 2,000, including many in Europe, Asia, and Australia. It describes itself as "an organization devoted to the study of palms, their propagation, culture, conservation, and care and development".¹ It holds biennial conventions both in the United States and foreign points, and publishes a quarterly journal with worldwide circulation. This journal accepts articles from nursery owners and hobbiest gardeners, but is also used by botanists in universities as a professional journal with scientific details about known and newly identified species.

Dent Smith was born in Staunton, Virginia in 1897, studied briefly at Auburn University, enlisted in the Army in 1915 at the age of 18, and served for seven years, rising to the rank of first sergeant. In 1921 he married Guadalupe Martinez, and they were together until her death in 1973.²

In 1923, he became a bond salesman and, by 1929, had established his own brokerage firm. Despite the Great Depression, he managed to make what was apparently a substantial amount of money dealing in bonds of defunct railroads and interurban rail systems. His explanation was that "A great many of the owners of the bonds in these companies failed to realize their value. Actually the bonds often represented real estate worth a great deal of money. Stockholders were washed out when the firms went bankrupt, but not the bondholders".³

In 1939, he retired from his position as president of his own company and turned his attention to publishing a magazine called "Encore," described as "a digest of the works of classical writers as well as modern". This venture ran for four years but was never a financial success. During World War 2, he sold it to the Saturday Review of Literature, which later shut it down.

In 1949, Dent Smith moved to Daytona Beach from Ridgewood, New Jersey, and acquired four acres of land on the peninsula, fronting on Peninsula Drive nearly three miles north of the Port Orange bridge and running to the Halifax river, one half mile from the ocean. In Daytona he began "looking for a hobby that would keep his hands busy and his mind occupied. He settled for collecting palms as he had collected other trees at his country estate in New Jersey". He studied as well as collected palms and, by 1960, had 150 different palm species growing on his property. (There are over 3000 species of palms in the world.)6

In 1955, he conceived the idea of founding a palm society, to be "a loose grouping of people with a common interest" but "not another garden club".7 He began an extensive correspondence with Dr. Harold E. Moore, Jr., a distinguished botanist at Cornell University. By 1956 he had established a journal for this society which he at first wrote himself, running off copies on a mimeograph machine.8 With the help of Dr. Moore the journal became printed and illustrated under the name "Principes", with the thought that palm trees were the princes of all trees.9 Dr. Moore continued actively as an adviser and contributor to the journal until his death in 1982. Upon his death, a man who had studied and worked with him at Cornell spoke of Moore as "the man who brought the scientific study of palms into the twentieth century. . .and who became the authority on the palms of the world".10

Cold winters in Daytona Beach began to take their toll. Smith records a "long cold winter of 1957-58" followed by a sharp but severe hard freeze in 1962. The loss of palms was severe, reducing the number of his species to seventy.11 A series of further freezes in the 1980s, with the temperature dropping to the low twenties and even teens, caused the loss of many more palms. Great damage was done by the severe freezes of December 1983 and January 1985, shortly before his death in April of that year.

Before his death, in December 1983, he received an honorary degree from the Florida Institute of Technology in Melbourne in appreciation for the work he did in establishing a palm garden on that campus.12 His second wife, Doris Smith, has kept the property up with those palms that survived the many freezes, along with many other plants.

Here are a few more details about this interesting person. He had his share of personal losses: both his children, a son and a daughter, predeceased him, the son being killed in the Korean War. It was his practice, well into old age, to walk two miles on the beach each day.13 A small collection of palm species, partly financed by Doris Smith, is planted at the Sugar Mill Gardens in Port Orange, called the Dent Smith Palmetum in his honor. The four acres on the peninsula where he stabled his palm garden remain a horticultural jewel of the area.