Origins Of The Botanical Garden At F.I.T. 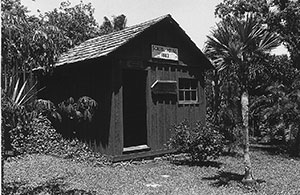 F.I.T. acquired the first forty acres of its present campus fronting on Country Club Road through a generous donation of the University of Melbourne in 1960. The land was originally owned by V.C. Brownlie who had donated the 40 acres to the Uni of Melbourne for educational purposes. After a few years of operation, and having built a small building on the site, the University decided that it was no longer viable as an educational institution. Of course, there was some competition from others who were interested in acquiring the property. Enter Mrs. Virginia Wood who, while Chairman of the Uni of Melbourne, was instrumental in donating the land to F.I.T. I believe the critical factor in our favor was my pledge to maintain the natural hammock that threaded through the property and to not disturb any of the trees unnecessarily. Conservation was of great concern to the U of Melbourne as it is to us. "Brownlie" and "Wood" Halls derive their names from these two key players in the process of the evolution of F.I.T. as we know it today.

Attempts at landscaping the campus began almost immediately. We planted a row of royal palms on the new campus all along Country Club Road. People were pouring in from the north expecting to see palms everywhere. I didn't intend to disappoint them, they would see plenty of them at F.I.T. But then came January 1961 and most of my beautiful royals turned into skinny haystacks. One of them has survived to this day and was subsequently transplanted to the protected south side of the "Quad". The unusually cold winters it has endured are readily evident by the gross irregularities of its trunk profile.

It was evident that I had a lot to learn about palms but I soon heard of a man named Dent Smith who could help me. He had founded a palm society and was growing a great many species in Daytona Beach. It seemed obvious that whatever he could grow there we should be able to grow here. A visit to his place was easily arranged and set the stage for a lasting friendship and a mutual interest in developing a palm garden at F.I.T. In subsequent years Dent Smith contributed greatly and in many ways to accomplish this. To recognize him we dedicated the trail through the hammock garden as the Dent Smith Trail.

During the construction of the dormitory complex, I was informed by the Fla Power & Light Co. that it would be necessary to dig a trench through the hammock to lay a power cable to the dorms. I had no choice but to agree to the project but extracted a promise from FP&L to snake the trench and cable around the existing trees and palms. This they did and it worked out well. Students began to use the narrow filled-in trench as a short cut to the dorms. The winding path crossing the hammock seemed to have a natural beauty all of its own [later to become the Dent Smith Trail]. A curving concrete bridge was built over the stream and Dent Smith and I began to plant Chinese fan palms [Livistona chinensis] along the way to complement the natural stand of Sabal palmettos. A potential for developing the hammock into an accessible place of beauty while maintaining its natural setting was becoming apparent. A botanical garden was about to unfold on the campus of the Florida Institute of Technology.

The palm garden is a native hardwood hammock in the floodplain of Crane Creek. The canopy of live and laurel oaks, red maple and cabbage palms are adapted to having their feet wet when the creek floods. This dense canopy provides a greenhouse effect so that cold sensitive plants might better survive periods of cold weather. The soil is fertile and wet and supports an abundant jungle-like growth.

In 1972 the Board of Trustees formerly dedicated this "jungle" as the students call it, as a botanical garden. At one time there were approximately 400 species of palms; but the subsequent freezes in recent years have reduced this number to about 60. Many have silver identification tags.