Among the first places new Florida Tech students visit for orientation and the last place they see before walking over to the university gymnasium for graduation, Gleason Performing Arts Center has spent its nearly 52 years as an unobtrusive but essential facet of campus life.

As a host of events, from concerts and lectures to plays and films, the 483-seat venue named after benefactor W. Lansing Gleason, the former Eau Gallie mayor, has also been a key link between the public and Florida Tech.

When it officially opened on Oct. 14, 1967, Gleason was described in publicity materials as “one of the finest and most fully equipped private auditoriums in Brevard County.” Over the years, that distinction has dimmed.

Gleason is now the opposite of dim. It is, in fact, blazing, after a summer-long project replaced the 1960s-era lighting system from lobby to stage with cutting-edge LED lights.

As part of this campaign, the HVAC system has undergone a full replacement and many of the rooms are being renovated as well. The next and final stage of this project is to replace the full sound system. 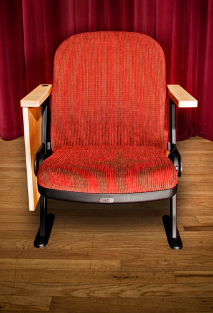 In an effort to grow with the expanding campus, a campaign themed "Name Your Seat" has been launched. This campaign gives donors the opportunity to be part of Florida Tech's history.

You can support the Gleason Performing Arts Center by making a donation to the "Take Your Seat" campaign.

In return, your name, or a name honored by you, will be inscribed on a brass plaque attached to a seat inside the Gleason Performing Arts Center.

Located at the heart of Florida Institute of Technology, Gleason Performing Arts Center provides a cultural and artistic landscape that enhances the community. Surrounded by a lush botanical garden, Gleason Performing Arts Center is a theatre-style, multi-use facility for all varieties of professional and community productions, as well as large-scale meetings, lectures and videoconferencing. Equipped with flexible lighting, sound, a 1,100-square-foot stage, load-in area, two dressing rooms, green room, and a large lobby/display area, Gleason is the perfect location to enjoy the company of others.

In the Next Room Performances

In the Next Room Performances