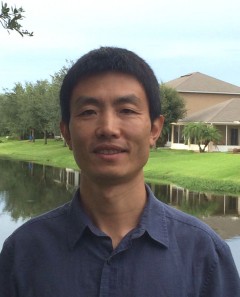 Current research focuses on photoproton chemistry. Proton chemistry is the chemistry that is induced by proton transfer, which is one of the most fundamental processes in nature. Most of proton transfer processes are driven by a high concentration of proton, and many chemical, material, and biological processes are sensitive to proton concentration, from acid-catalyzed reactions to the activities of many enzymes. Using light to modulate proton concentration and proton transfer will allow us conduct these proton chemistry with remote, temporal and spatial control. Metastable-state photoacid, which was discovered by our group in 2011, is the only type of molecule that can reversibly produce a large proton concentration (pH change) under photoirradiation. Using metastable-state photoacids, one can not only initiate proton chemistry with light, but the process can also be stopped and/or reversed by turning off the light or using a different stimulus, e.g. heating or light with a different wavelength. This type of photoacid can be generally designed by coupling a reversible photoreaction with a proton dissociation process. We design and synthesize different types of metastable-state photoacids and the materials containing them, study the mechanisms of their photoreactions, and demonstrate their applications. The potential of metastable-state photoacids in controlling acid-catalyzed reactions, volume-change of hydrogels, polymer conductivity, bacterial killing, odorant release, color change, and polymer phase change have been demonstrated by our group. Other groups have also used this type of photoacid to control supramolecular assembly, polymerization reactions, microbial fuel cell, ATP production of chloroplast, ion channel, cationic sensor, molecular machine, just to name a few.

Our group is also working on carbon monoxide (CO) releasing materials (CORM). While carbon monoxide is well known as a toxic gas, it is actually a naturally-occurring vasodilator. Preclinical studies have shown that a controlled dose of carbon monoxide can reduce cardiovascular disorders and protect neuro cells. PhotoCORM, which releases CO upon irradiation allows remote, temporal and spatial control of CO release and thus has been intensively studied in recent years. Most CORMs including photoCORMs are metal carbonyls, which present a long-term health concern due to potential toxicity of the heavy metals. Our group reported the first organic photoCORMs in 2013. These photoCORMs can be activated by visible light, have potentially low toxicity, allow the delivery of carbon monoxide to be monitored by fluorescence imaging techniques, and thus are useful tools for the study of the biological functions of CO. Currently we are developing different nonmetallic CORMs and photoCORMs and incorporating them in tissue scaffold and polymer nanoparticles for biomedical applications.

Research of Liao’s group has been focused on discovering new photochemical processes, designing and synthesizing molecules and polymers based on these photochemical processes, and demonstrating their potentials in material, biomedical and catalytic applications. In addition, we also conduct research on electric and optic materials. Our group closely works with material engineers, biochemists and physical chemists to make our research fruitful.