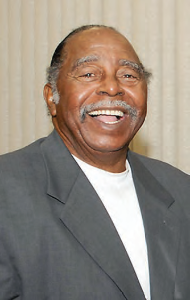 In 1956, nearly a decade before the Civil Rights Act made equal employment opportunity the law, Dr. Montgomery made history as the first African-American professional in America’s nascent space program when he was hired as an electronics technician at Cape Canaveral.

Two years later, in 1958, Dr. Montgomery became the first black student to sign up for classes at Florida Tech, which at the time was called Brevard Engineering College and was based in classrooms provided by Brevard County schools. When the district discovered that an African American would be attending classes in its building, they told Florida Tech founding president Jerome Keuper that if Montgomery did not withdraw, they would evict all students from the classrooms.

To honor the pioneering spirit and his contributions, the Alumni Association presents an annual Dr. Julius Montgomery Pioneer Award to a deserving candidate. Like the award, this scholarship will continue to celebrate the life and legacy of Dr. Montgomery by providing financial support for students from historically marginalized backgrounds. The student named for this scholarship may continue receiving the award each year until graduation. Students receiving this award will be known as "Dr. Julius Montgomery Scholars”.