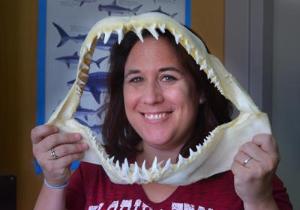 Animal reproductive strategies can impact genetic diversity, which helps populations adapt to a changing environment. Loss of genetic diversity has been associated with high extinction risk, especially in large apex predators such as sharks. Vital to preserving the marine food web and the health of the world’s oceans, sharks also grow and reproduce more slowly than most other animals on earth. Currently, scientists estimate that overfishing and other disturbances cause the death of over 100,000,000 sharks per year globally, including species like tigers, hammerheads, and great white sharks. The Daly-Engel Shark Conservation Lab at Florida Tech synthesizes lab-based genomics and bioinformatics with large-animal field ecology and predictive spatial modeling to discover and define drivers of biodiversity, and predict how changing environmental conditions will impact shark reproduction and movement patterns. With the help of an army of students and collaborators from all over the globe, these studies are designed to provide a roadmap to help policy makers better protect the world’s fiercest, most vulnerable predators.

Dr. Toby Daly-Engel’s research combines genomics with marine ecology to study the evolution of mating strategies in animals that invest heavily in reproduction, especially sharks and rays. She is interested in how reproductive behaviors, particularly from a female fitness perspective, interact with the environment to influence species, populations, and genomes. Her PhD work at the University of Hawaii explored the ecological and genetic effects of female promiscuity in sharks, a subject she expanded on using an insect model as a postdoctoral fellow at the University of Arizona. As an Assistant Professor at the University of West Florida, Dr. Daly-Engel worked with collaborators from academia and the National Marine Fisheries Service to monitor marine biodiversity and study the evolution of reproductive strategies in both shallow-coastal and deep-water sharks in the Gulf of Mexico. Her teaching experience includes an NSF GK-12 Fellowship, an NIH Postdoctoral Fellowship in Research and Teaching, and several years developing research-based undergraduate coursework at the University of West Florida, where she was honored with the Student Government Association’s Distinguished Teaching Award in 2016. ‘Dr. Toby’ joined the faculty at Florida Tech in August 2017, and since then has mentored nine undergraduates and two PhD students in her lab, appeared in her own special on Discovery’s Shark Week 2018, authored eight new publications on sharks, and described three new species, including one named after pioneering Shark Lady Dr. Eugenie Clark.

These funds go directly to help the high school, undergraduate, and graduate students in the FIT Shark Conservation Lab perform independent research and travel to present their work to fellow scientists, natural resource managers, and the general public.