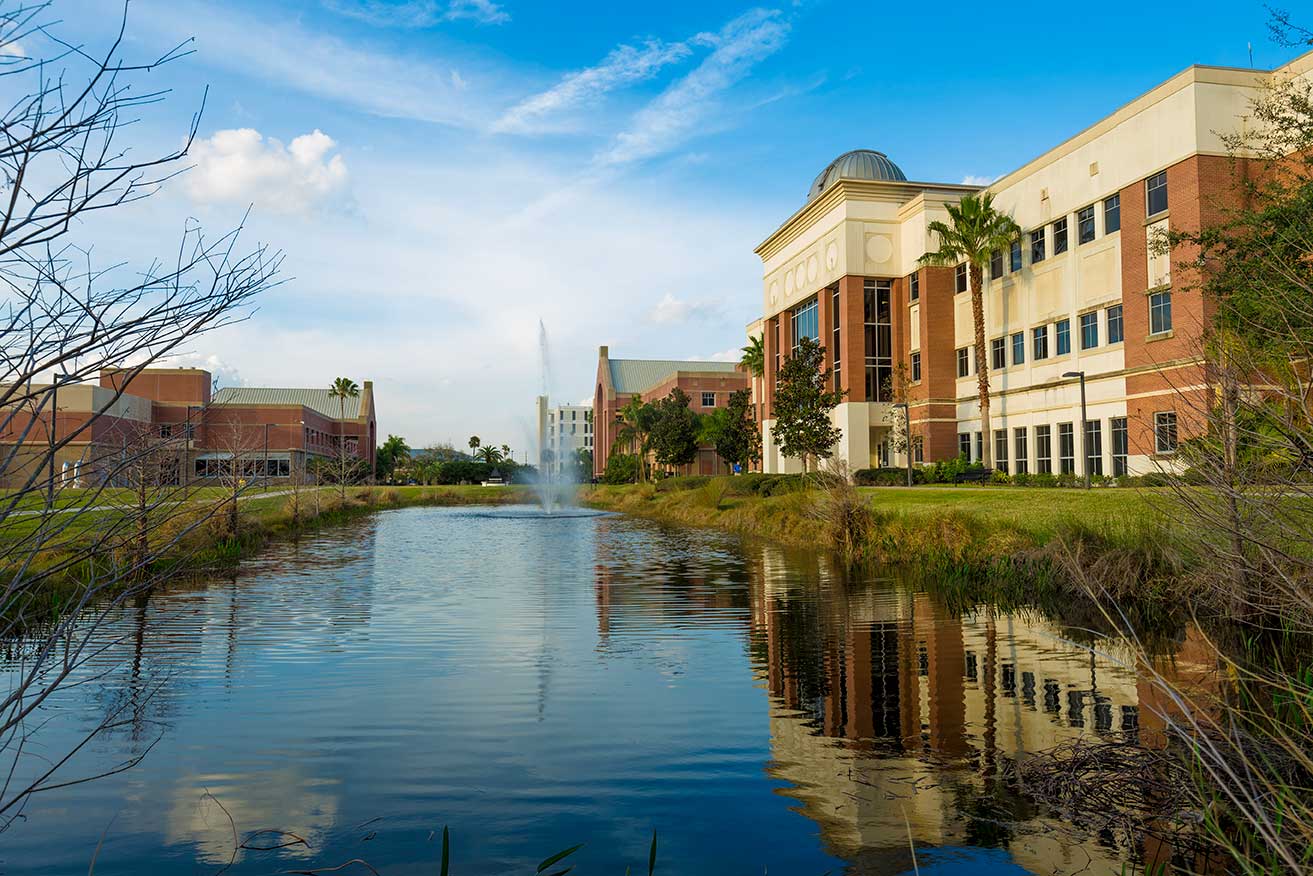 We recognize and honor students and faculty for outstanding performance in the 2019-2020 academic year.

The Honors Convocation Program - Spring 2020 includes all Distinguished Student Scholars and Outstanding Students of the Year. The recipients of named awards and scholarships are featured below.

The Kerry Bruce Clark Award for Excellence in Teaching

Dr. Kastro Hamed is a professor in the Department of Mathematical Sciences and former Head of the Department of Education and Interdisciplinary Sciences. Dr. Hamed spearheaded a $1.6 million dollar grant from the Department of Education and started the UTeach program at Florida Tech. This program attracted numerous stellar undergraduate students who chose science education as their career paths. Dr. Hamed’s outstanding teaching methods, which include analogies and inspirational stories, have had a significant impact on his students. Dr. Hamed also supervised over a dozen Ph.D. students, including Rodd Newcomb (Director of the Academic Support Center) and Jared Campbell (Head of IT at Evans Library), who recently co-organized, with honor society Phi Kappa Phi, Florida Tech’s first annual “Animal Talks.” Dr. Hamed distinguished himself as a leader in STEM education and, according to Dr. Hamid Rassoul, former dean of the College of Science, “Dr. Hamed is an encyclopedia on educational innovations and techniques... he is more than an excellent teacher; he is the standard for what excellence in teaching should be.”

The Charles E. Helmstetter Award for Excellence in Research

Dr. Carlos E. Otero is a tenured Associate Professor in the Computer Engineering and Sciences department and Director of the Center for Advanced Data Analytics and Systems (CADAS). Dr. Otero has pursued research activities in the areas of wireless networks, embedded systems/IoT, cloud computing, and artificial intelligence. He has secured a total of $1,737,979 in research funds from private industry, state and federal agencies, including Air Force Research Laboratory (AFRL), Northrop Grumman Corporation, and Rockwell Collins Corporation. Dr. Otero has authored 28 scientific peer-reviewed journal articles published in prestigious and highly-ranked avenues including IEEE Intelligent Systems, IEEE Transactions on Antennas and Propagation, IEEE Transactions on Systems, Man, and Cybernetics, and IEEE Transactions on in Intelligent Transportation Systems. He has also authored an academic textbook, a book chapter, and 52 peer-reviewed conference proceedings, totaling 82 publications. Dr. Otero is also an active senior member of the IEEE. According to Dr. Yeralan, Dean of Engineering and Natural Sciences at the International University of Sarajevo (Bosnia and Herzegovina), “[Dr. Otero’s] research output is at a level that exceeds that seen at internationally recognized research intensive universities . . . and [he] has done all this with professionalism, modesty, and grace.”

The Andrew W. Revay Jr. Award for Excellence in Service

Dr. Marius Silaghi is an associate professor in the Department of Computer Engineering and Sciences. Dr. Silaghi served on the Faculty Senate for 5 years and currently serves as chair of the Technology, Resources, and Infrastructure (TRI) Committee. He is the senate’s expert on IT related topics. He has also served on the Graduate Council, the ACITC committee, and on the Disciplinary Committee. Dr. Silaghi also helped organize the American Mathematics Contest on our campus and served as advisor for the ΣΣΘ/SST Club at Florida Tech. According to a mother of one of the children participating in the mathematics contest, “Dr. Silaghi has been extremely encouraging in terms of allowing my youngest child to participate... I am thankful for Dr. Silaghi’s efforts in providing such opportunities for my children as well as for the greater community.”

The Senate’s Gavel Award is presented to the Faculty Senate president in recognition of his leadership over the past academic year. Dr. Brian Lail has been an active voice of reason in the Senate for a number of years, and more recently he actively participated on the Tenure Exploration Committee to help bring Florida Tech to its competitive edge. Dr. Lail also spearheaded the establishment of the two University Committees: University Committee on Faculty Promotion and Tenure and the University Teaching-Track Promotion Committee, which oversee the promotion process in the tenure-track and non-tenure-track, respectively. Dr. Lail also oversaw necessary changes to the criteria for promotion and setup plans for revisions to ensure clarity and fairness. On a number of occasions, President McCay praised Dr. Lail as an effective leader who sought fair treatment of all members of the Florida Tech family. The current Faculty Senate President Dr. Nasri Nesnas stated that he considers Dr. Lail “amongst the best in bridging critical communication between faculty and the administration.”

Kelly J. van Woesik is a Biomathematics major who excels in academics and has many achievements in professional and student organizations. Her accomplishments include a research award from the Florida Collegiate Honors Council, five Taking the Pulse of the Planet awards from the National Oceanic and Atmospheric Administration (NOAA) for research on coral and worm rock dissolution rates under ocean acidification conditions and the movement patterns of white sharks, a 5-week internship at NOAA’s Earth System Research Laboratory Global Monitoring Division in Boulder, Colorado, and a publication in the scientific journal PeerJ. Kelly has made a significant impact on Florida Tech as a student leader: she is as a member of the Florida Tech Honors College and Student Honors Council, member and treasurer-elect of the Phi Eta Sigma National Honors Society, member of the Honor Society Phi Kappa Phi, and founder and president of the Florida Tech Swim Club. Kelly is also a PADI open water, advanced, and rescue diver, an AAUS scientific diver, and a DAN diving first aid provider who has logged 187 dives to date.

Olivia M. McKelvey is a Marketing major with a Communication minor who has a stellar record of achievements in academics and student organizations. Olivia has served as the captain of Florida Tech Women’s Swim Team, Vice President of Delta Mu Delta, Editor-in-Chief of Florida Tech’s student-run newspaper The Crimson, and Social Media Coordinator for the Florida Tech Public Relations Club. Notably, she worked as a Florida Today Newsroom Intern where she published over 50 articles in three months and received a published byline in USA Today. She is also a member of Phi Eta Sigma, Phi Kappa Phi, and Lambda Pi Eta, the honor society for the National Communication Association. Olivia is a strong contributor to the university and local communities as a volunteer working with the Panther Swim School, Scott Center for Autism Treatment, Habitat for Humanity, and Team IMPACT.

Mason A. Thurman, College of Engineering and Science

Nicolette C. Murphey and Mason A. Thurman were selected as co-recipients of the Kerry Bruce Clark Endowed Scholarship in Marine Biology for their strong academic records, involvement in research in Dr. Shenker’s laboratory and at Harbor Branch Oceanographic Institution, performance in Dr. Aronson’s class on invertebrate zoology, presentations at meetings, participation in campus organizations, and vision for advancing their educations and careers.

Brendan L. Steffens was a Graduate Student Assistant (GSA) in Aerospace, Physics and Space Sciences, teaching in the introductory physics labs from Fall 2017 through Spring of 2019. Brendan impressed faculty with how rapidly he learned the content of the lab curriculum, his professionalism, his dedication to academic honesty, his sterling reliability and his overall competence. After two semesters, he established himself as the lead GSA. In his second year, he willingly spent time teaching what he had learned to new, incoming Graduate Student Assistants. He also excelled at providing support to faculty teaching lecture courses from the introductory level to the senior level. In Fall 2019, he obtained funding as a research assistant, which has allowed him to focus more of his time on his graduate education. He continues to make excellent progress in his research.

Dr. J. Clayton Baum is an outstanding mentor and colleague, who taught physical chemistry at Florida Tech for 37 years. In his honor, alumni and friends of the Chemistry Program have established a scholarship for an outstanding junior Chemistry major. This year’s awardee, Korbin Reed, is from Lilly, Pennsylvania. Korbin has maintained a grade-point average of 3.21 in the difficult Chemistry Program and has made the Dean’s List. He will begin research this fall.

The Faculty Senate awards two scholarships to student across the colleges on an annual basis.

Josseanne Marques Duarte is an Aerospace Engineering major. She was born in the United States and raised in Cape Verde. Josseanne is a member of the American Institute for Aeronautics and Astronautics, Florida Tech Rocketry, and Phi Eta Sigma. She has a work study position at the Harris Student Design Center where she teaches classes on machine shop equipment.

Jordan Michelle Doss was new to aviation when she matriculated in Fall 2019 and has jumped into the program with enthusiasm. She has been described as attentive and meticulous in class. She is pursuing her BS in Aviation Management with Flight and has maintained an excellent academic record during her first semester.

Jake M. Cole is an undergraduate student in the Honors College working on his B.S. with dual majors in Aerospace Engineering and Astronomy & Astrophysics with an expected graduation of May 2022. Jake is involved in research in magnetic-hydrodynamic waves in the ionosphere, writing a code in Python to show the wave at different positions and at different times. He has been on the Dean’s list every semester he has been at Florida Tech. He serves on the Student Honors Council and is in the Phi Eta Sigma Freshmen Honor Society. In addition to being a scholar, Jake is also a diesel mechanic.

Kelly J. van Woesik is an undergraduate student in the Honors College working on her B.S. in Biomathematics with an expected graduation of May 2021. She has been involved in research investigating coral reefs keeping up with the sea-level rise. She worked with the National Oceanic and Atmospheric Administration (NOAA) Earth System Research Laboratory Global Monitoring Division, where she assisted the Carbon Cycle and Greenhouse Gases group. She was awarded the Distinguished Student Scholar Award for academic achievement, Outstanding Student of the Year by her department, and the university-wide Outstanding Junior Award this year. Kelly is also in the Tri-Beta Biological Honor Society and Phi Eta Sigma National Honor Society. She is a peer tutor in math and science on our campus.