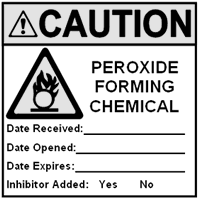 Peroxide-forming chemicals are a class of compounds that have the ability to form shock-sensitive explosive peroxide crystals when exposed to various storage conditions or extended storage times. These peroxide crystals can violently detonate when subjected to: thermal and mechanical shock, impact and friction, or combined with other compounds. Other compounds polymerize unsaturated compounds and can initiate a runaway, explosive polymerization reaction. The rate at which peroxides form is compound dependent and is classified into three groups (A-C) related to the inherent dangers. More on classification is described below.

Conditions that cause peroxide formation

Factors that affect the rate of peroxide formation include exposure to: air, light and heat, moisture, and contamination from metals. Some Peroxide-forming chemicals react with oxygen, even at low concentrations, to form peroxy compounds. Since some peroxide-forming chemicals are packaged in atmospheres containing oxygen, even unopened containers can eventually form peroxy compounds. Therefore it is important to pay close attention to chemicals expiration date and to immediately dispose when expired; specifics on storage is discussed in below.

Peroxide formation becomes evident when crystalline solids are observed in the liquid itself or around the bottle’s cap. Some peroxide-forming chemicals produce solutions that appear cloudy. Peroxide crystals may form on the container plug or the threads of the lid and detonate when the lid is twisted. Do not open a liquid organic peroxide or peroxide-forming chemical if crystals or a precipitate are present.

Peroxide formation can be controlled by adhering to the following methods:

See appendix A for a comprehensive list of peroxide forming chemicals.